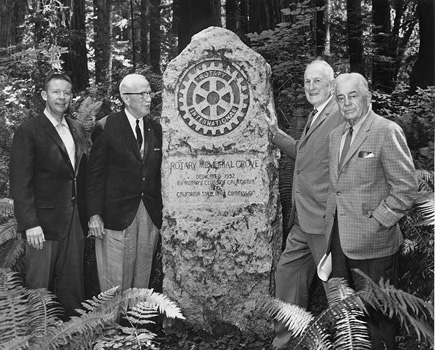 .
There is, on the northwest shore of California, a land whose patrimony belongs to the ages. Here tower redwood trees which knew earth before the Shepherd’s Star, were forests primeval at the time of the Crusades, and were finishing a generation of centuries ere Columbus landed … the oldest living things.

The thought of a memorial grove deep in this Redwood Empire had been close to the heart of Harvey B. Lyon, of Oakland, since that day in 1945 when his son Bruce had died in the B-24 he was piloting over Germany. Bruce Lyon always had loved the great trees. 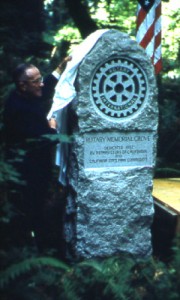 And it seemed to many other California Rotarian that their Clubs might likewise fittingly dedicate a grove or these patriarchs so that men could meditate in the cathedral hush of their shade.

Thus it was done. On a morning in September, just a bit more than a year ago, a group of 50 Californians journeyed to Prairie Creek State Park, 48 miles north of Eureka, California., there to dedicate two 80-acre redwood shrines – the Rotary Grove and the Bruce Lyon Memorial-to stand inviolate for all time.

Harvey Lyon, himself a Past Governor of the Rotary District (1S7) in which this was happening, spoke feelingly of the cooperation of Rotarians or California, and all over the world, who had made Rotary Grove a reality. It had been necessary for the California Rotarians to raise $10,000, which was turned over to the Save the Redwoods League. This, in turn, was matched by a like sum from the State of California, which made possible the acquisition of Rotary Grove. Lyon said that this day Rotary was setting aside “a portion of God’s noblest handwork for posterity.”

Al Hackim, another Past Governor of the District, remarked on the spiritual heights of the dedication, and praised Harvey Lyon, Al Tate, Walter Helms, Rilea Doe, Kelton Steele, and other Rotarians for their work in raising funds for Rotary Grove. Aubrey Drury, secretary of the Save the Redwoods League, congratulated the District, adding that “these templed trees belong to the silence of the millenniums.”

“It would be a singularly unresponsive soul which could remain unimpressed by the redwoods,” noted Dr. Holland F. Burr, Oakland minister and Rotarian in the dedicatory address. “They stimulate reverence, wonder, and awe–and are an ever living inspiration… Why despair, then? God took over 2,000 years to make these redwoods… God is not in a hurry. Why should we be? Quietly as the growth of a redwood forest, events have occurred through the centuries–and will occur in the future. These great trees are scarred by fire and storm, but they carry on. Let that be an example.” 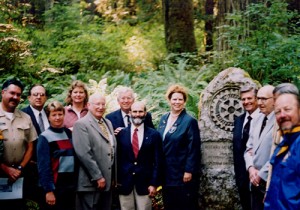 A few minutes later, Harvey Lyon unveiled a granite abaft, donated anonymously by Berkeley Rotarians, upon which is carved the Rotary wheel and an inscription: Dedicated by the Rotarians of California and the California State Park Commission.” In honor of the memory of his brother Bruce, Dr. Ted Lyon, a Rotarian of Orinda, sang Trees and I Heard a Forest Praying. A prayer for world peace, voiced In this deep forest silence, concluded the dedication.

Later that day the Lyon family and friends dedicated the near-by Bruce Lyon Memorial Grove–a holding acquired by themselves under separate arrangement.

As Redwood Highway 101 winds northward from Eureka through the monarchs of Prairie Creek State Park, the traveler will see a number of signs bearing the name of donors who have given that some of earth’s noblest stands may be spared for generations yet unborn. Among these will be “Rotary Grove” and “Bruce Lyon Memorial”