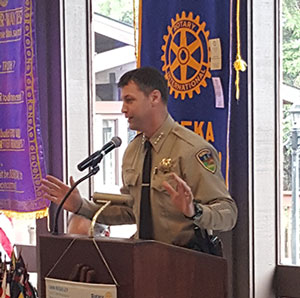 The meeting was called to order at 12:18 by President Bruce.

Billy Honsal invited the crowd to direct the conversation and choose one of the following: “who I am, the programs, or marijuana”

Relieved that nobody wasn’t really interested about the marijuana topic he proceeded to elaborate on his biography. He is a member of southwest Rotary. He believes you should never take membership for granted. He believes that the friendship and camaraderie is what really makes rotary so special. His dad really instilled a sense of right and wrong and his mom inspired him to push the boundaries. He went to college of the redwoods and graduated from the police academy. He then went on to work in Madera, California where there were many immigrant and affluent neighborhoods. He learned a lot of Spanish  and then moved to Sunnyvale, California to be a police officer and firefighter. Once he had his first child, he really wanted to move back to Humboldt County and raise his children so he moved back in 2003.

We are establishing neighborhood watch programs in all the different areas of the community and they are working.

After returning to Humboldt County, he quickly got a job as a Sargent at Humboldt State University and stayed there for 3 years. Later he received a job at the district attorney’s office and learned about the interesting dynamic between politics and law enforcement. Later there was an opportunity for an under-sherriff position and so he decided apply although he didn’t think he’d get the job. Mike Downey wanted a fresh vision and decided to give Billy Honsal a shot and they have made the Humboldt County Sheriff’s department progressive and service-oriented.

Last year they had 6 deputies responding to all calls and now because of Measure Z the department has about 8-10 deputies. The public voted for Measure Z which has really helped grow the department. The mandate now is to be proactive and become problem solvers.

Things that I want to do is to go after drugs. The hardcore drugs. Our child abuse rates are sky high because our drug abuse is really high in this community.

We have 417 beds in our jail and that’s a lot of beds for a county of this size and it stays at about 97% full all the time. We’re going to try find a way to transition inmates back in the community as well as set them up with transitional housing. Our goal is to break the cycle and give these individuals the tools to be successful when released.

Last thing is the children. I’d love to focus on the children in our community. Something we can do is support the organizations that focus on the children. Also, we should be encouraging community members to report child abuse. We have a huge problem with homelessness and drug addiction and it stems from the child abuse or sexual abuse that is abnormally larger in this community from their childhood. I want to get more programs for the children like recreational centers that promotes alternatives to the drug lifestyle. A lot of times kids don’t have the vehicles, finances, or ability to go to many places in our community.

He then opened the conversation up to questions

Why is there so much crime? Lower level felonies have been pushed to county detention centers or jails which means more criminals are winding up in our jail rather than going to prison which keeps many individuals that would normally be in jail back in the streets.

How many drug and alcohol rehab programs are available? There are three main programs that probation uses but their is a couple hundred beds but realistically closer to 150 and this is drug not alcohol, we really need to help those with alcohol problems as well. If you look at the success rates at these places they are not that high and we’re spending a lot of money on these programs. I think having options is a good thing, but we need to be effective about it.

What is the overdose rate for 2017? I don’t know the exact number but it’s in the hundreds. I think you would be surprised how many people die with alcohol or drugs in their system. This last year our overdose and suicide rates we’re abnormally high.

I heard that we had more opiate prescriptions than people in this county, what can we do to fight the opioid epidemic? “We are doing a lot to combat that problem and they are also prescribing opiates on the reservations. They will be calling out doctors when their patients overdose to put them on notice. We had a meeting with us attorney and we discussed many topics around the opioid epidemic. When you measure counties regarding how bad it is with opioids our county is red which is the highest level you can attain.

What kind of things do you plan to improve?

The meeting was adjourned at 1:20.

If you find any typos, have questions and/or comments please send an email to info@960Humboldt.com!