Brad Mettam presided, wearing a colorful vest.  Nancy Dean gave the invocation.  She said that Keith Crossley is in the hospital after suffering a stroke. Past president Bruce Smith held up a Times-Standard picture of Brad and demanded compensation.  Don Leonard asked when he could trade in the gold coin he won last week for real money.
Former exchange student from Denmark Martin Grieve (2009-10) returned for a visit and brought pictures of his apprenticeship as an electrical technician.  He bought a house in the country and 100 acres of farm land.  Gregg Gardiner said that Toys For Kids now serves 8000 children.  They just bought 37 pallets of toys at a toy show. 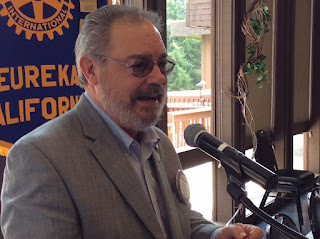 Our speaker was CHP Public information Officer Paul Craft.  He said that response times were slow because they only have 30 officers to cover the entire county. They also help out during the fires- and give talks to organizations like ours.
By Hank Ingham|2022-11-10T09:22:39-08:00August 7th, 2018|Uncategorized|
Page load link
Go to Top