Turkey rolls highlighted the lunch selection. Sausage and potatoes came in second. Don Leonard led the flag salute.  John Fullerton gave the invocation. Brad Mettam presided.  Ken Stodder mentioned that the Red Sox were 85 and 35 this season. The club got a plaque from the Coast Guard. Mathew Owen announced a Done In A Day project at Carson Park this coming Saturday-pulling weeds.  Toys For Tots kicks off its campaign this month with a dinner at Blue Lake Casino. Rick Littlefield asked for more donations to the fire relief fund.  They have raised $12,000 so far.

Our speaker Rob Homelund oversees community and economic development for Eureka. He said we only built 8 houses in Eureka this last year.  6 the year before. 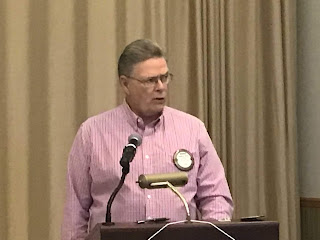 He blames outdated zoning laws adopted in the 1960’s.  These require so much parking per resident that high density housing is not feasible. He also said that they are in the process of creating 19 murals in the city, and they’ll be done this weekend.