Rotary started with the vision of one man — Paul Harris. The Chicago attorney formed the Rotary Club of Chicago on 23 February 1905, so professionals with diverse backgrounds could exchange ideas and form meaningful, lifelong friendships.

Over time, Rotary’s reach and vision gradually extended to humanitarian service. Members have a long track record of addressing challenges in their communities and around the world.

That commitment endures today through an organization that remains truly international. Only 16 years after being founded, Rotary had clubs on six continents. Our members now span the globe, working to solve some of our world’s most challenging problems. 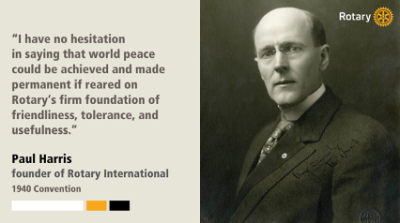 “Whatever Rotary may mean to us,
to the world it will be known by the results it achieves.”

Early History – Rotary Club of Eureka was organized by twenty-one men on October 10, 1923 and its formal charter was approved by Rotary International on November 9 of that same year. (CHARTER MEMBERS). An item in “Grindings”, the weekly publication of sponsor club San Francisco, noted that on January 15, 1924 a group of San Francisco Rotarians spent the week-end in Eureka where “Leo Lebenbaum’s beautiful hostelry (Eureka Inn) was the scene of much revelry where hospitality reigned and friendship was supreme.” This event was in celebration of the presentation of the Rotary Club of Eureka’s Charter.

At that time, Paul Rieger was District Governor and the District was then known as District No. 2.  There were only 95,000 Rotarians in 1,551 clubs in 27 countries of the Rotary world and Guy Gundaker of Philadelphia was President of Rotary International.  Significantly to Rotary Club of Eureka, the official Rotary emblem, (a gear with 24 teeth and an axel key) was adopted in the year of our founding, 1923.

The Rotary Club of Eureka donated money to help treat local polio patients in the 1920’s and were the leaders in providing vaccines to immunize every child in Humboldt County in 1959-60, which stopped polio in our county.

The Philippine Rotary District began a program to immunize 6 million children in the Philippines in 1979.  The World Health Organization (WHO) became interested because smallpox was officially gone in 1980.

In 1985 Rotary International (RI) at the Council of Legislation decided that RI would promote a world-wide Rotary effort to immunize the world’s children to end polio. The polio eradication program began in 1987 and was gradually endorsed by districts and clubs.  Today, polio remains endemic in only two countries — down from 125 in 1988 and the efforts continue.

Rotary’s commitment to Service above Self is channeled through Five Avenues of Service:  Club Service, Vocational Service, Community Service, International Service and Youth Service. Since our founding in 1923 the Rotary Club of Eureka has remained active and engaged…

The history of RYE began in the early 1940’s when Rotary International (RI) encouraged clubs to have more engagement with our foreign counterparts.  RI hoped that such communication and fellowship would further its object of international understanding, goodwill and peace and would help clubs in the sphere of International Service.  Initially no specific programs were specified.  It was left up to the clubs to chart their own course. Rotary Club of Eureka’s first exchange student was in 1948, inbound from England. That was just the beginning of many youth who have stayed with Eureka Rotarians, building relationships that have lasted throughout the years.

Rotary Club of Eureka’s efforts with international students began when RI started the Ambassadorial College aged student program in 1949 after the death of Paul Harris.  Later students at Berkeley came to Eureka for visits. They were provided bus tickets to visit Humboldt County for three to seven days and attended club meetings, stayed at the homes of Rotarians and were usually driven back to the Bay Area at the end of their visit.

Rotary Club of Eureka’s first outbound student was in 1959, when Bill Crichton visited Mexico for a few weeks. During this same year, a student from Eureka, Sam Kunkle, was selected to travel to Kassel Germany where he lived for a year. These two students began Eureka’s outbound program of students traveling throughout the world which continues today.

In 1977 RYE supplanted the Ambassadorial College with Rotary Youth Exchange, which RI monitors, but is run at the district level administratively with clubs doing the actual work.  Rotary Club of Eureka’s first RYE was in 1979.

Rotaract – Rotaract clubs bring together people ages 18 and older to exchange ideas with leaders in the community, develop leadership and professional skills, and have fun through service. Rotaract members decide how to organize and run their clubs, manage their own funds, and plan and carry out activities and service projects. The Rotary Club of Eureka sponsored Lost Coast Rotaract which was chartered in 2009.  In 2021 Rotaract clubs were allowed to function as equals to Rotary Clubs, with no age limits and full access to Foundation Funds.  They no longer need a Rotary Club to act as a sponsor, other Rotaract clubs can now sponsor a new Rotaract club.